Louis Killen   •   Gallant Lads Are We 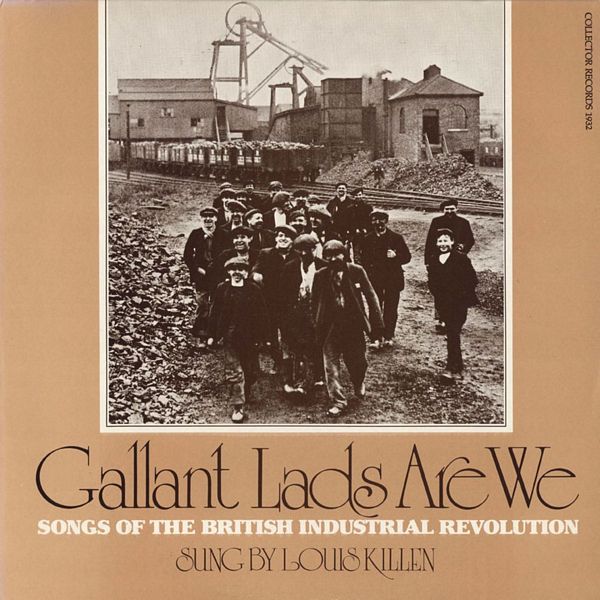 This what the critics say about Louis Killen:
New York Times—"a master of the traditional English ballad...a master in fact, of almost any kind of fine singing."
The Melody Maker (London)—"a giant of the British folkmusic revival."
Folk Scene Magazine (Los Angeles)—"a singer of grace and genius."

In his huge repertoire of traditional English ballads and folk songs, Killen includes scores of songs about the lives and times of coal miners, textile workers, sailors, railroaders and other laborers and craftsmen. When COLLECTOR RECORDS decided to add an album of British industrial folk songs to its catalogue, there was never any question that the singer for the job was Louis Killen.

Killen was born in Gateshead-on-Tyne in northeastern England into a family that looked upon singing as its main entertainment. In the 1950's and '60's he played a leading role in the British folk revival and in 1961 he made the performance of folk music a full-time career.

Killen has lived in the United States since 1967 (currently in Massachusetts, near Boston) where he has had a major impact on the traditional music scene. He has performed in hundreds of festivals, coffee houses, colleges, and folksong clubs in the U.S., Great Britain & Canada, as well as at Carnegie and Avery Fisher Halls in New York and Royal Festival and Royal Albert Halls in London.

Although Louis Killen is a master of the English concertina, he decided to do all the songs on this record unaccompanied, just the way workers sang them in the olden days. On this album Killen's voice is his musical instrument and a delightful one it is.

"Louis Killen brings to life scenes from the past, through song, story, and ballad. He is a teller of tales, large and small, spoken or sung, which reflect the lives and views, real or imaginary, of ordinary men and women, be they farm or factory worker, sailor or sinner, loved or lost. He is a presenter of the common people's view of history, as portrayed in their tales and music."

(The following is an excerpt from the essay by Norman Willis, Deputy General Secretary of the British Trades Union Congress, which is in the booklet accompanying this record. The booklet also contains the lyrics of all the songs sung by Louis Killen on this record.)

This collection of industrial folk songs, movingly interpreted by Louis Killen, reaches back into the roots of 19th century industrial Britain. Many of these songs constitute a damning indictment of what happens when uncontrolled and uncontested self-interest is allowed to dehumanize a whole society.

In the early days of the industrial revolution few workers were able to read, but they could express their needs and hopes in songs. Even when unions were illegal during the 19th century, songs helped to sustain and communicate the indignation against the squalor.

What glows through this collection of songs is the spirit, which despite the background of industrial inhumanity, sparked the establishment of the British trade union movement. The tradition of fighting against social deprivation and for decent living standards is part of the trade union movement. That challenge is still with us today. Robert Frost wrote of "promises to keep, and miles to go before we sleep." The history of trades unionism has shown that putting your promises into songs helps you to keep them.

THE COALOWNER AND THE PITMAN'S WIFE
A humorous look at strike attitudes showing how removed the owners were from the workers. Class differences were so great that many thought the miners must, by their very blackness of skin, be in league with the devil.

THE BANKS OF THE DEE
From the days when coal-owners could manipulate the men's wages through their agreements with the unions. Anyone earning above the county average was clear proof that the wage rates were too highl!

THE RECRUITED COLLIER
Not so much a song about industry but more a verbal picture of part of a mining community and the effect one person going to the wars has on those left behind.

PIT BOOTS
A piece of bawdiness often found attributed to other trades, too.

THE FACTORY GIRL
Working class girls were often the prey of the idle sons of the rich, though most songs of this type follow the "rags to riches" dream. The girl here, has a much better grasp of reality.

AA CUD HEW (I COULD HEW)
Ed Pickford's moving song of a man whose health, but not his spirit, has been ruined by "black lung", pneumoconiosis, caused by inhalation of the coal dust

THE DALESMAN'S LITANY
A countryman's view of working in Yorkshire's manufacturing towns. The Dales are the valleys running through the hill-country north of the Yorkshire industrial region.

CHARLES DOCHERTY
An unusual song about an industrial accident where the dead man is explaining his reasons for dodging around the safety regulations-to keep the production line moving.

THE JOLLY GRINDER
A nice blend of anti-work and anti-temperance in this parody of "The Miller of Dee".

PADDY WORKS ON THE RAILWAY
Two distinctly British versions of the well-known song collected in the engine sheds of Manchester, Birkenhead, and Hellefield, and collated by Ewan MacColl.

IN THE SIDINGS
Cyril Tawney wrote this song from the viewpoint of a rural stationmaster, who loses his job because a government policy change closes down his line. Being in his late 50's, the chances of finding a new trade are almost nil.

THE FOUR LOOM WEAVER
Becket Whitehead's version of an older, lengthier song, "The Poor Cotton Wayver", with the song pared down to fit later and perhaps harder times.

THE CROPPER LADS
A song in praise of the frame-breakers in the Yorkshire woolen mills of the 1820/30's. "Croppers" cropped the knap off the newly woven cloth with shears weighing up to 40 Ibs. When the owners brought in mechanical shears the men took a very "direct action" against losing their jobs.

GALLANT LADS ARE WE is one of a series of COLLECTOR albums in the area of industrial folklore and folksong. Previous discs include songs of textile workers, coal miners, railroaders, Wobblies, lumberjacks, sailors and steelworkers.