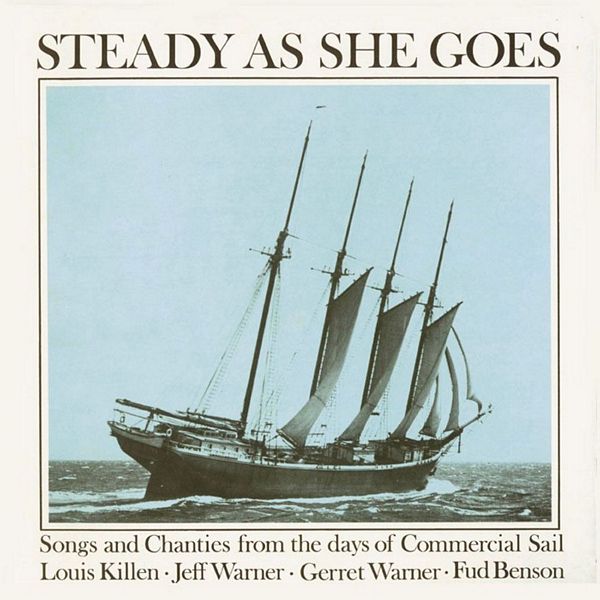 LOUIS KILLEN was brought up in a singing family in the industrial and mining region of the river Tyne in Northeastern England. He arrived in the United States in 1966 with a bag full of hundreds of marvelous traditional British songs of sailors and fishermen, miners and milkmaids, farmers and weavers. Britain's loss has been America's gain. His subtle, full bodied interpretations, sometimes mournful, sometimes hilarious, have delighted audiences from coast to coast. He has recorded for Topic and Front Hall records.

PADDY LAY BACK: A capstan shanty (used for hauling up the anchor) describing the feelings of a sailor towards his shipmates when landing on a new ship. There are, as well, some terse words concerning the Captain, the Mate, and the agent who got him the job.

BOLD RILEY: A halyard (literally haul on the yardarm) shanty. According to A. L. Lloyd, it got its start in ships carrying sugar and rum from the West Indies to Bristol and Liverpool. "White stocking day" refers to the days when wives would put on their most attractive attire to make their trips to the shipping office for their allotment pay.

ROLLING DOWN TO OLD MAUI: Stan Hugill of Liverpool says that as early as 1820 Maui, one of the Hawaiian Islands (then the Sandwich Islands), was considered "home" by the Yankee sailors who hunted the northern grounds of the Behring Straits for right and bowhead whales. This an off-watch song, as distinct from a working song, of whalermen longing for the women and weather of better latitudes.

JOLLY ROVING TAR: Frank and Anne Warner collected this song from Mrs. Lena Bourne Fish of East Jaffrey, N.H. in 1941. The vitality of the melody doesn't hide the feelings of Jack Tar towards the shoreman who loved the sailor when he had money and despised him when he didn't.

TOPMAN AND THE AFTERGUARD: Conditions in the navies of the world were always bad in the days of sail. Here is the story of the British Royal Navy as told by the afterguard or Marine who worked in the topmast and by the topman or sailor who worked in the ship.

OFF TO SEA ONCE MORE: The most realistic of all songs about the conditions of seafarers under sail. This what life was like both ashore and at sea.

STRIKE THE BELL: Four hours on watch and four hours off, day and night, was a hard life aboard ship. Eight bells marked the end of the watch, as well as the time, and answered the plea of the sailor for a few moments rest in his bunk, even if the call would soon be "all hands on deck" to weather the storm. The "glass" referred to in the chorus is the barometer.

SHIP IN DISTRESS: One of a number of traditional songs dealing with the terror of a sailor adrift in an unsellable vessel.

BLOW THE MAN DOWN: A halyard shanty with a story line favored by all sailors who had to spend much time away from the ladies.

THE COAST OF PERU: A nearly step-by-step account of the hunting and killing of a whale. The song was collected by Gale Huntington of Martha's Vineyard, and is thought to date back to the last quarter of the 18th century.

ALL FOR ME GROG: Another off-watch song describing both of the major pleasures of Jack Tar ashore.

SHALLOW BROWN: Another halyard shanty from the West Indies, this one collected by English folklorist Cecil Sharp in the early part of the twentieth century. Some versions of this song indicate that Shallow Brown might have been a slave who was sold to a Yankee shipowner. Free man or slave, he is jumping ship "... to cross them Chili mountains" and seek a better life.

BRING 'EM DOWN: One of the shanties used for "bracing" the ship when short, sharp pulls of the line were needed. Bracing turned the yards when the ship was being tacked or changing course.

AWAY RIO: A capstan shanty used to ease the work of "heaving a pawl" and raising the anchor. A favorite song of the day, it would have been known by old hands and green recruits alike, and was most often used as the first song of a voyage when outward bound from home port.

The work songs of the sailing ships were "chanteys" or shanties"-both spellings are used, but the pronunciation is always with the soft "sh". That's why some experts believe the origin is French from "chanter", but no one knows for certain.