The music of Stockton's Wing has evolved into an exciting blend of traditional and contemporary Irish music and song, performed with power and precision by some of the finest musicians in Ireland. Back in 1977, in Ennis, Co. Clare, the five member group including all-Ireland champions, Paul Roche, Maurice Lennon, Kieran Hanrahan and Tommy Hayes with Tony Callinan won the traditional section of a Guinness sponsored talent competition in Limerick (the rock section was won by a little known group from Mount Temple School, called U2). As a result of this competition they secured a recording contract with Tara Records and released their debut album, Stockton's Wing. 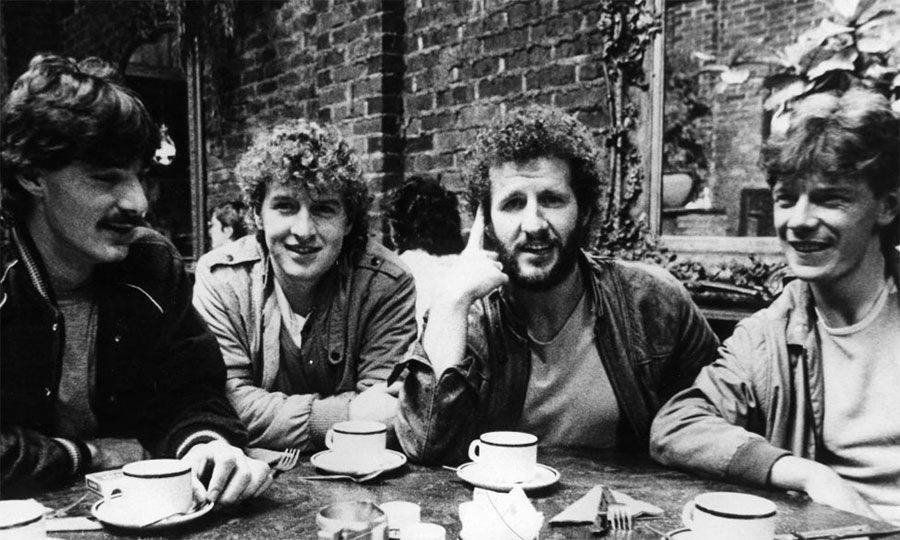 Singer/songwriter, Mike Hanrahan, replaced Tony Callinan in 1979 and in the spring of 1980 they released their second album on Tara Take a Chance. The album featured some original music and marked the arrival of a progressive force into the world of Irish music. Following the success of the album, they toured extensively, creating a storm of enthusiasm at major Folk Festivals across Europe.

At Ballisodare Folk Festival in the west of Ireland, they met with Australian, Steve Cooney, who joined forces shortly afterwards, playing bass guitar and didgeridoo. In 1982, the Band released their third album Light in the Western Sky — a highly polished album which represented a significant shift in their musical direction, focusing more on the band's creative original material. The album featured two hit singles "Beautiful Affair" and "Walk Away." It also featured a haunting composition "The Golden Stud" a combination of Aboriginal and Irish music.

Percussionist, Tommy Hayes, left the band in 1983 and was replaced by Fran Breen on drums and Peter Keenan on keyboards. After listening to the band, a critic for the New York Times wrote "they were eclectic, electric, passionate, personal, innovative and powerful." In 1985, a live album Stockton's Wing Live - Take One was recorded in Galway and Dublin capturing that 'eclectic, electric' sound and enjoyed major success.

Tours of America, Canada, Europe and Australia kept the band away from the recording studios until the autumn of 1986 when they recorded their fifth album Full Flight. The album contained no less than four hit singles - "Why Wait Until Tomorrow", "Avondale", "New Clare Revival" and "So Many Miles." The group's sixth album, Celtic Roots Revival, produced by Steve Cooney, received critical acclaim in America where the group headlined many major music festivals.

In 1991 Kieran Hanrahan was replaced by Davey McNevin on banjo and mandolin. Drums and bass guitar were dropped from the lineup, shifting the musical emphasis to an acoustic based sound. With the release by Tara Records of a compilation of the best of the Band's earlier work called The Stockton's Wing Collection, they renewed their contract with Tara and together with producer Bill Whelan, recorded their seventh album The Crooked Rose in January 1992. The album of original music highlights the excitement, drive and virtuosity of each individual musician and creates the sound that will keep Stockton's Wing to the forefront of contemporary and traditional Irish music.

In July, 1994, Stockton's introduced to the lineup the award-winning young singer/songwriter from Omagh, Co. Tyrone - Eamon McElholm. He replaced Mike Hanrahan who retired from the band to follow a solo career. 1995 saw the release of the Letting Go album which featured Eamon's songwriting talents.

In November 2003 Stockton's Wing held a reunion concert in their home town of Ennis, Co. Clare. Founding members, Kieran Hanrahan, Paul Roche, Maurice Lennon and Tommy Hayes, were joined by long-time band member Mike Hanrahan. The concert was a hugh sucess with over 1200 people packed into the West County Hotel.

More recently, in January 2009, they took to the stage once more at the West County Hotel, Co. Clare. The line up included Paul, Maurice, Tommy and Mike Hanrahan.