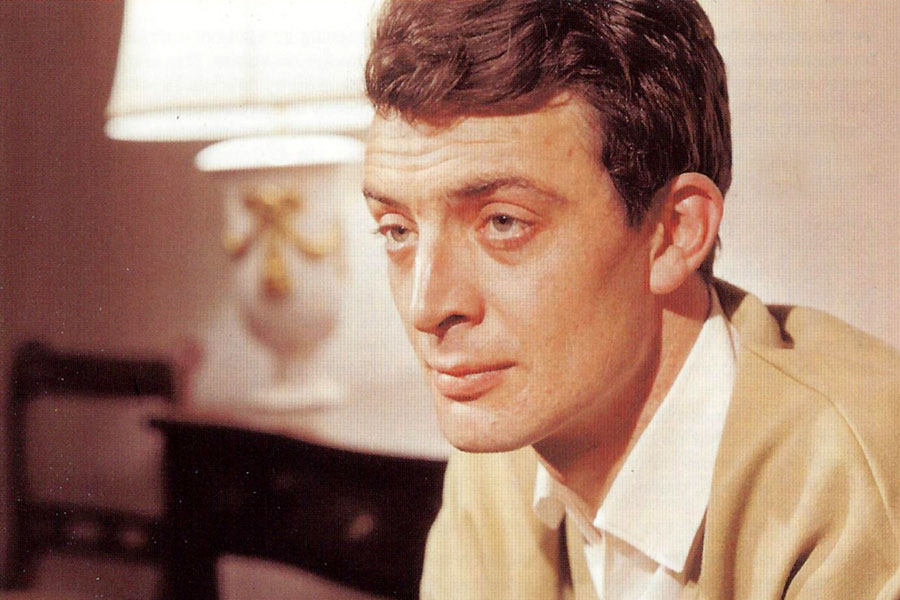 Here is Jake Thackray, a singer-songwriter in the French tradition, a 'chansonnier' whose songs are nevertheless convincingly and idiosyncratically English. This is scarcely surprising. After graduating from Durham University, Jake spent four years in France as a teacher where the likes of Jaques Brel and his particular hero Georges Brassens made their indelible mark. The influence of their songs and story telling propelled Jake towards his own writing and singing style. But despite this Gallic background his songs are no mere copies; they are firmly and recognisably rooted in the English countryside, character and language. They are also painfully funny, sad, tragic, rude, irreverent, incisive and happy, and often enough all these things at the same time. In short, they are unique.

By the mid sixties Jake was back in his native Yorkshire teaching at a school near Leeds where he found a way to get unruly pupils to take an interest was through his songs. This and performing in folk clubs led to appearances on local BBC programmes followed by national TV with regular slots on The Frost Report, The Braden Beat and That's Life. In nearly thirty years of performing he made over 1,000 radio and TV appearances ranging from a topical song in magazine programmes to broadcasts of live concerts on both radio and television. His EMI catalogue produced seven albums between 1967 and 1991.

Although Jake gave up teaching for show business he didn't really like being what he called "a performing dick". He was uncomfortable with big audiences and would settle for a pub or community hall in preference to the grandeur of the London Palladium (although he appeared there in a Royal Variety Performance). The barrier between stage and audience was unnatural to him and many a time you would find Jake in the bar after one of his gigs, supping and chatting away as though he too had simply come to see some chap with a guitar perform. He said he never really understood why people would pay good money to see him.

Modesty and shyness don't begin to explain the complexity of this self-deprecating man. Maybe a part of it was that he disliked the pomposity of showbiz, the falseness of its 'luvvies' and the trample of its commerciality. Here was a man who was honest with his audience and refused the charade of encores, preferring instead to tell them: "That was my last song and I'm going to do three more".

Audiences loved him for his fiercely intelligent lyrics, their satirical bite and his lugubrious style. Any hint of deceit or falseness in others provided the ammunition for his talent. The law and the judiciary are regular objects of derision in his songs, as are all those bigots, zealots and those self-important figureheads of authority.

The poetry of love is abundant in Jake's songs too, more often the absurdities of tricky situations peppered with lusty thoughts and youthful fears, or the unrequited dreams of those left on the shelf. The Blacksmith and the Toffee Maker is the most improbable of love songs that, after you've stopped laughing, leaves you with a warm glow of satisfaction and a sense of Tightness. For nearly all the men and women who are the subject of these songs their love comes at a price, be it dreadful relatives, a jealous father, rampant mother, clumsy dog or some other terrible idiosyncrasy. In private life Jake was a devout Roman Catholic but this did not stop him puncturing the pomposity he found there or reflecting the smallest absurdities of religion through caricature — which nevertheless was wholly believable and funny.

Some might say he was irreverent and others believed his attitude to women was misogynistic but neither is true. Sister Josephine is such an implausible story yet its memorable lines suspend all disbelief and it remains one of his most popular songs. The Hair of the Widow of Bridlington details the triumph of a middle-aged woman's self-determination in spite of her chattering and disapproving neighbours, whilst On Again! On Again! not only identifies with the joys and shortcomings of the fairer sex, but gently mocks his religion too.

Animals feature with real affection in songs about horses, dogs and, of course, the inimitable Bantam Cock who, through admirable cunning, thunders on to greater sexual prowess. Then there are songs which take you straight to the hardship and beauty of the Dales. Go Little Swale will instantly conjure up the breathtaking scenery of this part of Yorkshire whilst Old Molly Metcalfe brings home the bleakness of a sheepminder's short life up on the hills amongst the bracken, the wool from her sheep keeping the wealthy folk warm whilst she suffers. As with great poets, Jake Thackray's words are beautifully chosen and assembled with the skill of a real craftsman. They appeal to children and adults alike yet often for entirely different reasons. The humour is warm, familiar and easy to identify with, but sprinkled with a neat twist here or a little barb there, enough to make you think twice and smile again at their cleverness. Here was a man who knew how to use the English language, whose rhymes defied the rules yet worked perfectly. Accompanied by his distinct mellow-sounding guitar (strung with nylon, not steel) Jake would pluck out the tunes in a style somewhere between jazz and classical. Seeing him perform live you would wonder if he was able to keep up with the demands of the tune, but his music drives the song on with an occasional pause here or a complex chord sequence there to add to the mood and meaning.

Jake Thackray gave up performing in the 1990s and died on Christmas Eve 2002 at the age of 64. He left behind a collection of songs unsurpassed by any contemporary songwriter or poet, the songs of a craftsman whose lyrics, melodies and accompaniment are as relevant and appealing today as they ever were. He impressed and influenced many performers including Jasper Carrot, Mike Harding and Ralph McTell. He inspired countless other singers and artists who perform his work in clubs across the world. In fact, if Jake Thackray had been French he would surely have received the Legion d'Honneur and become a national treasure.

So do Jake the honour of listening to this CD in the way he would have wished: pull up a chair, sit down with a glass of something and imagine Jake right there in front of you, his jutting chin, his expressive face, one foot propped on a chair and enjoy him plucking his guitar and singing on all [21] tracks of "The Very Best Of Jake Thackray".