Something To Sing About 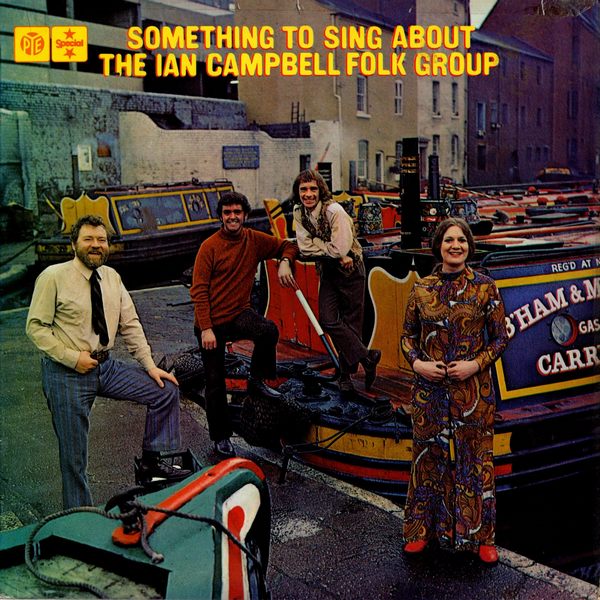 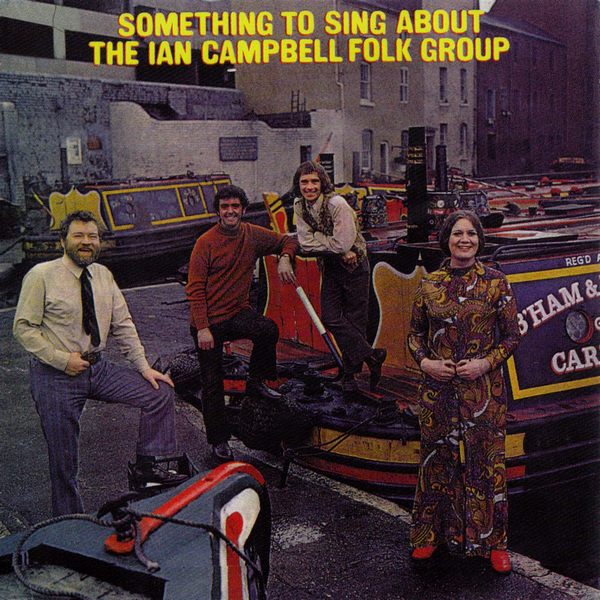 This record is produced in conjunction with a series of thirteen television programmes from ATV.  Ian Campbell, who devised and presented the series, opened programme one with the following statement:

In these programmes we are going to take a look at the changes in social life brought about by the great upheaval we now know as the Industrial Revolution. Unfortunately the people who were most effected by these changes - the ordinary working people were the inarticulate and the illiterate who were least likely to have comittedtheir reactions to paper for the benefit of posterity.

They were not absolutely without means of expression, however; they found a voice in their songs. Not only the traditional folksongs of the purely oral culture, but also the songs that they made their own by adoption, selected from the offerings of the street ballad sellers and the music halls. In this series we intend to let the working man speak to us through his songs.

Here is a selection of songs from the series, at least one from each programme. The record is intended not only for those who enjoyed the series and wish to have a more permanent momento, but also for all those who appreciate good songs well sung and who have come to realise that traditional songs have qualities that go far beyond entertainment and mere diversion. Each of these songs is a message from the past, from the mouths and hearts of ordinary people who realised that in the conditions of their life and work there was something to sing about.

The Ox-Plough Song
Like the one which follows, this song reflects the static and orderly rural society which was to be disrupted by the industrial revolution.  Land was the basis of wealth, the land worker was the pillar on which a stable society depended. Every man knew his place and was expected to be satisfied in it. The rhythm of life and work was as regular and predictable as the seasons of the year.

The Haymakers
A beautiful and stately song, full of the sunshine that is necessary for successful haymaking, and with that dreamlike quality which in the listeners mind recreates a childhood summer or some such golden age.

The Greasy Wheel (Trad with words I. Campbell)
Collected in fragmentary form by Charles Parker of the BBC for a radio programme about life on the narrow-boats, this song captures the brief glory of the men who manned the steam barges at the end of the last century. Their glory was brief because the steam power which gave them their ascendancy had already, in the form of the locomotive, made the canal system obsolete.

The Iron Horse
This song records the wonder and awe of a simple rural Scot on his first encounter with a steam loco. At a time when learned men were debating whether the human frame could survive the shock of travel at 30 mph the railway engine was indeed the wonder of the age.

The Durham Lockout (T. Armstrong)
One of the great songs written by Tommy Armstrong the collier balladeer, this deals with the infamous occasion in 1892 when Durham miners were locked out of the pits in order to force them to accept a 10% cut in wages. After six weeks of hardship they agreed to the cut but were told that it had been raised to 13 %. The miners refused to work on these terms, and the dispute was eventually resolved when both sides agreed to the original ten per cent reduction.

The Sheffield Grinder
In the 1860s the Sheffield steel industry was notorious for the abuse of child labour, made necessary by the underpricing of Government contracts for Army goods. This song expresses the bitter contempt of the Sheffield men for the Government enquiry commission who reported that bad working conditions were largely the fault of the workmen.

The Testimony of Patience Kershaw (F. Higgins)
Although written fairly recently by Frank Higgins of Liverpool this moving song is based very literally on the actual evidence given by young Patience Kershaw before the Government Commission of Enquiry into Child Labour in 1842. As a result of the enquiry in that same year an Act of Parliament prohibited the underground employment in the mines of women and boys under ten years old.

Medley of Childrens Street Songs
A remarkable indication of the strength and tenacity of oral culture is provided by the subculture of our schoolchildren. A vast store of street games, satirical and ribald songs and rhymes, legalistic rituals for the claiming and transferring of property, sexual and social lore and superstition is learned from older brothers and sisters and duly passed on to the next school generation purely by oral transmission. The selection of street songs given here is from Aberdeen, Birmingham and London and was gleaned from the recollections of the members of the Group.

The Flash Frigate (Compiled by Hugill)
Not a shanty, this song comes from the Royal Navy of the 1850s and gives a very clear picture of the rough discipline and hard labour of life before the mast in a ship of the line.

Ask a Pliceman (Rogers and Durandeau.)
Nowadays most people retain of this song only the first chorus line and a vague memory of the tune; the implication of human frailty or even corruption in the police force is late Victorian music hall, however, it was a common belief that no drunk taken in charge could hope to retain his watch and chain, and that every bobby consequently owned several.

Rigs of London Town
In the Victorian age with its astounding hypocracy popular art was presenting a picture of the ideal woman as a delicate creature who blushed at a mans smile and trembled at his frown, and got the vapours at the sight of a naked-table leg. The legal possession of her husband, her only interest was his domestic comfort and the bearing and rearing of his children. Meanwhile for the majority of working-class women life was an unending drudgery from childhood to premature old age, stunted or even deformed by the conditions of life and work in the mines and mills of the industrial towns, marriage bringing merely the brief interruptions of frequent child-birth and the occasional surviving child to share the degradation. The only alternative open to a poor woman was prostitution, and surprisingly few took advantage of it. The common attitude to tarts expressed in this song may explain why.

No Courage in Him
The sentimental view of marriage found in drawing-room songs or music-hall numbers like My Old Dutch is seldom repeated in traditional song. Wife-beating, wife-selling and Taming of the Shrew themes in which a woman suffers indignity at her husbands hands are common, and they find their inevitable answer in those songs in which the woman uses her only and ultimate weapon and emasculates her oppresser.

The Girl I Left Behind Me
Any song which becomes popular with the army eventually gains a wider circulation among the people, and every campaign produces a hit song which is likely to outlive the political consequences of the military action. Tipperary, the great marching song of the army that fought the Kaiser, was given a new lease of life among the squaddies who fought Hitler, and is now in circulation all over Europe. Break the News to Mother was a popular tearjerker in the American Civil War; the British army sang it in the Boer War, and it can still be found in the repertory of our country singers. The Girl I Left Behind Me is still one of the most popular army songs ever, and can be reliably dated from 1758.

The Cutty Wren (A. L. Lloyd.)
This song is said to have been sung by the insurgents during the Peasants Revolt of 1381, although the words refer to a much earlier ritual of pre-Christian origin. We can only guess at the tune that was used at the time. Green Bushes, the eminently suitable one given her, was put to the song by A. L. Lloyd.

Leave Them a Flower (Wally Whyton).
On a theme which is growing in importance among contemporary songwriters, this song is a plea for a change in our treatment of the precious environment which we have in keeping for future generations.

The Campbell Legacy
A Handful of passionate, dedicated characters were at the heart of the folk revival which changed the face of British music in the early Sixties. A L Lloyd and Ewan MacColl offered their own visionary zeal to inspire a movement rooted in British folk song, while a small coterie of committed musicians formed the backbone of tile club culture which sprang from it and today remains an important alternative to the conventional music industry.

Ian Campbell was always a central figure in that evolution Steeped in the history of his family's background in tile Aberdeen fishing community and its own rich singing traditions, he emerged - like the British folk revival itself - as a metamorphosis of the brief, crazy skiffle boom which swept tile nation in the late 50s. Campbells farriers were one of the first groups to make the logical leap from the predominantly American folk blues favoured by the skiffle bands to exploring a purely British tradition with the Ian Campbell Folk Group. He had. after all a head start with his vast childhood legacy of Scottish traditional songs, which were still sung in the family even after they had relocated to Birmingham.

The classic Ian Campbell Folk Group line-up - featuring the superb singing of Ian's sister Lorna, with guitarist Brian dark and talented multi-instrumentalist John Dunkerley -pioneered British folk song through the '60s and they remained unique ambassadors for the music across three decades. They'd play their own Jug O' Punch club in Birmingham one night and London's Royal Albert Hall the next, while their role as the unofficial flagship of British folk music was emphasised by regular TV appearances, the patronage of royalty - Princess Margaret was one of their biggest fans - and their willingness to embrace the contemporary songwriting which emerged so forcefully in the '60s. They were the first British act to record a Bob Dylan song The Times They Are A Changing before Ian Campbell emerged among the very best of the new writers with songs like The Sun Is Burning, still something of an anthem for the anti-nuclear movement.

While other populist groups of the period invariably incurred the wrath of the folk purist, the Campbells managed to combine their broad appeal to mass audiences with an enduring grass roots respect earned by unwavering commitment to their original ideals. They provided a launching pad for the careers of outstanding musicians like Dave Swarbrick and Dave Pegg - who both went on to grace Fairport Convention with such distinction for so many years - and continued to mix humorous stage presentation and vibrant crowd-pleasing choruses with angry social commentaries and a perennial willingness to lend their name to worthy causes.

Something To Sing About was an album which ably reflected all these facets, showing both the uplifting buoyancy of their singing and their commitment to songs born from the joys and frustrations of everyday life in working class Britain. From the great Tommy Armstrong's sorrowful depiction of the Durham Lockout to the medley of children's street songs; from Wally Whyton's thoughtful ecology anthem Leave Them A Flower to the Victorian music hall favourite Ask A Pliceman; from the salacious humour of No Courage In Him to the stark realities of The Testimony Of Patience Kershaw, the Campbells showed exactly why their appeal transgressed all the normal strictures of age, culture and musical boundaries. The Campbells popularity endured even while Ian's sons Robin and Ali were beginning to make their own mark in the pop world with the reggae hand UB40. That they still sound so fresh, alive and relevant underlines the full significance of that popularity.