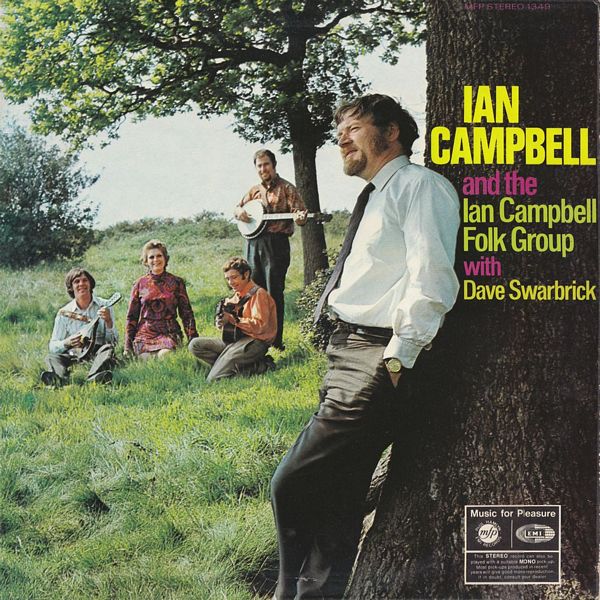 Ian Campbell is one of Britains leading folksingers and is renowned for his work in recreating and popularising traditional songs. With the Ian Campbell Folk Group he has made countless television and radio broadcasts, and the Groups numerous recordings have made their music known throughout the Continent and the English-speaking world.

Ian Campbell and his group have played a great part in introducing folk-music to children, but although the songs on this record are all taken from a book intended for use in schools they are not in any sense to be regarded as children's songs. They are thoroughly enjoyable and often socially significant songs which represent the best in traditional and contemporary folk-music, presented with the sensitivity, intelligence and exuberant good-humour which they deserve.

As well as leading the Ian Campbell Folk Group and arranging their songs, Ian is a song writer whose works are sung and recorded by many other contemporary folk musicians. His younger sister Lorna, like him, was born in Aberdeen but now lives in Birmingham; she is accepted as the finest young female folksinger in Britain. The mother of two small children, she is married to Brian Clark, a Londoner who moved to Birmingham to join the Ian Campbell Group; he now specialises in contemporary and humorous songs. Dave Pegg left school in Birmingham to earn his living as a professional musician on double-bass, and it was only after joining the Group that he took up mandola and mandolin also. Andy Smith developed an interest in American folk-music and the five-string banjo, and quickly established an enviable reputation with his dazzling technique on this instrument. He first appeared with the Group a week after visiting the Jug o Punch, the Campbell Groups famous folksong club in Birmingham, where he found that the Group were looking for a replacement for their previous banjo player. Dave Swarbrick was one of the original members of the Ian Campbell Folk Group but for some years he has been performing as a soloist or in partnership with singer Martin Carthy. He is generally accepted as Britains most exciting young folk musician; on this record he renews his old association with Ian Campbell.

Beggin I Will Go: In the Middle Ages beggars formed a much larger part of our population, and begging could be a very respectable calling. In Scotland, where there was no Parish Relief, a limited number of beggars wore actually licensed by the King. The hero of our song was not one of these Kings Bedesmen but a member of a much larger and less reputable freelance fraternity.

Sugar Candy: A lullaby said to be based on the street-cry of Robert Cohort, who sold boiled sweets in the streets of the Border towns before the First World War.

Wild Colonial Boy: Australia has many songs about the hush-rangers, lawless men who wore often escaped convicts, and who lived by the gun and held the countryside to ransom. These men were often regarded as heroes in the Robin Hood mould and received help and encouragement from the poor settlers, many of whom were familiar with the penal settlements. Several sources claim that the Donahoe-Colonial Boy saga was originally sung, as it is hero, to the tune of The Wearing of tlie, Green, but because of its association with the Irish rising of 1798 the tune was banned by the Australian government and its use became a punishable offence.

Sleepytoon: About half of the traditional songs ever collected in Scotland were found in the Buchan district of Aberdeenshire, where this song comes from. The tune and some of the words given here are from the singing of Norman Kennedy the Aberdeen folksinger; the rest of the words are from the collection of Gavin Grieg.

Here Come the Navvies: Using a traditional Irish tune, Ian Campbell wrote this song for a radio programme about the men who built the canals.

The Jolly Herring: Despite its apparently trivial words this song has considerable symbolic significance for the people of those sea-faring communities for whom the herring was the staff of life and the source of all prosperity.

The Firemans Song: The words and music of this song are by Don Bilston, a Birmingham engine-driver who has spent his life working on the railway and now gives artistic expression to the life of the loco-man.

The Praties They Grow Small: A song that came out of the dreadful period of the potato famine when many Irish people were faced with the choice of starvation or emigration. Irelands population was reduced by a third and has never since regained its former proportions.

The Kerry Recruit: This song illustrates another way out for the struggling Irish farm labourers. Having served their purpose in the Army the survivors were given back to their country, often wounded or crippled, with no prospect but to join the begging fraternity.

The Barrin o the Door: A traditional Scottish song which tells of a minor engagement in the age-long battle of the sexes.

Eight Shillings a Week: This dales from the winter of 1830, when starving farm-workers in the Southern Counties riotously demonstrated for a basic wage of half-a-crown a day. They comitteda breach of the peace but otherwise harmed no one, yet after the demonstrations three of them were hanged and over four hundred were transported. At that time a loaf of bread cost a shilling.

The Coast of Peru: A stark song about an everyday incident in a bloody and wasteful trade.